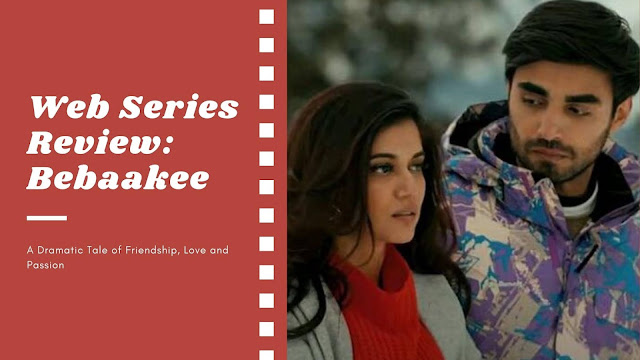 When the lockdowns started in March, we were hoping that things will be back to normal by June-July. But the situation worsened each month, and even after the economy opened up, things are anything but back to normal.

I don’t know about you all, but I’m very apprehensive of the situation all around and I’m still staying home as much as possible. Thankfully, I’m not losing my mind from boredom as I’m keeping myself entertained with interesting movies and shows on ZEE5. The latest Hindi web series that I enjoyed binge-watching on this streaming platform is #Bebaakee – and it was so impressive that I thought of sharing a quick review of the show with you guys. I know all of you stuck at home are dying for some good show recommendations and this review might help you choose the next one!\

In the history of Hindi OTT shows, there has not been a more regal indoor set than the family home of the protagonists of this series. Director Muzammil Desai has taken inspiration from grand movie sets to create a stunning mansion for the two media Moguls and best friends who stay together as one family. Their sons – Sufiyaan and Imitiaz - share a strong brotherly bond, which is eventually threatened by the force of love. The lavish opulence of their wealth, the high-society lifestyle and the typical rich-people ambience are conveyed effortlessly in the series. In the midst of innumerable crime thrillers and popular sit-coms flooding the streaming platforms, it is refreshing to watch a family drama that plays on the classic theme of a love triangle.

Well-written characters are the backbone of any show, and Bebaakee definitely impresses in that department. Sufiyan Alazi (played by Kushal Tandon) is the brooding young entrepreneur, expertly handling the empire of his father. Imtiaz (played by Karan Jotwani) is a playful, charming dude who reigns over the same empire alongside Sufiyan. Kainaat Sahni (played by web series debutante Shiv Jyoti Rajput) is a happy-go-lucky, passionate journalist who ends up being the love interest of both the men in the story. The senior generation is also played effortlessly well by the likes of Mohit Chauhan, Sameer Malhotra, Suchitra Pillai and Ananya Bellos, among others. The characters portray the high-class lifestyle with ease, keeping the whole mood of the drama toned down enough to give it the necessary classy webs series feel, instead of a trashy TV soap vibe.

Sufiyan and Kainaat – the protagonists – couldn’t be more unlike each other. Kainaat is a bubbly, easy-going middle-class girl with a passion for journalism; while Sufiyan is a filthy-rich, intense businessman who comes from a prestigious & renowned family. But the law of love that dictates the attraction between opposites, holds true yet again as this unlikely couple gets drawn towards each other. The journey of their love story is far from easy though. They encounter numerous twists, turns, obstacles and clashes before they can even realise their own feelings for each other. Add to this, Imitiaz’s attraction to Kainaat, and we’ve got an intense love triangle that defies the bonds of friendship, brotherhood and loyalty. When Sufiyan and Imtiaz get ready to go to any lengths to secure a place in Kainaat’s heart, it not only threatens to destroy their brotherly bond, but also affects the family dynamics, the relationships and even the entire media business owned by the two families. The moody music – specially the soulful song Intehaan – holds the narrative together, while the gorgeous locales of Simla and Manali present the perfect backdrop for this drama to unfold against.

This gripping tale of family, love and friendship spans over 8 thrilling episodes that form Season 1 of this ZEE5 original web series. It’s one of the first prominent Muslim social dramas to be seen on any Indian OTT platform. The aesthetic cinematography, crisp direction, passionate dialogue delivery and well fleshed-out characters put this family and romantic drama in a league of its own. There are some intense dialogues that leave a mark on your heart, my favorite one being – “Hawa ke jhokon se bebaak mohabbat nahi bujhti, yeh #DilKiHichki hain jo ruhh ke saath fanaa hoti hain!” This is surely one of the must-watch shows among all the gems you can find in the #ZEE5Club. By now you must be dying to know who among Sufiyan and Imtiaz actually gets the girl? Well, tune in to ZEE5 and binge-watch Bebaakee today!